Every Wednesday from 11:30 am – 1:30 pm in July and August Berczy Park comes alive with free music from some of the best Toronto street musicians.  Today see Kaysik. 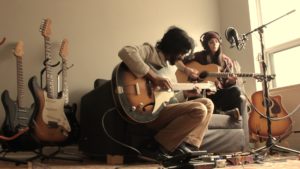 KAYSIK (Nico Henderson and Zeeshan Lalani) met at a Kensington Market open mic in early 2016 and began playing together later that year. They have now secured multiple residencies at Toronto bars and are working on pulling together material for their first EP. KAYSIK’s music is both atmospheric and folky, underpinned by traditional roots and furnished with world music influence.