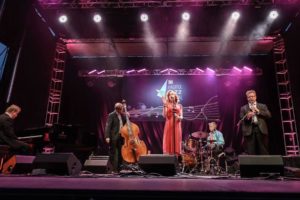 Having found solace at a young age in Ella Fitzgerald and the vocal work of Louis Armstrong, JUNO nominated Alex Pangman also found a calling. Proud to be known as ‘Canada’s Sweetheart Of Swing’, her natural vocal abilities and obsessive, deep appreciation for that bygone era have earned her a place in our nation’s heart. She’s not old fashioned, though. Pangman is a vivacious performer who retains creative control of all her work: carefully choosing her repertoire, composing original material, assembling her backing band and co-producing much of her recent recorded output on Justin Time Records. Rather than some casual throwback, Pangman and her Toronto band The Alleycats deliver a unique, deliberate reinterpretation of one of North America’s most fertile, timeless eras. Her newest record was JUNO nominated for jazz vocal and explores the popular songs of the 1920s, 30s, and 40s. Backed by her group of sentimental gentleman, their performance is a sure bet to please all generations of jazz fans and is a fan amongst avid jazz listeners and lindy hoppers alike (otherwise known as swing dancers!). The group have played both Massey Hall and Koerner Hall, and opened for Willie Nelson, Bob Newhart and played with both Bucky & John Pizzarelli, as well as being a music student to the late Jeff Healey.