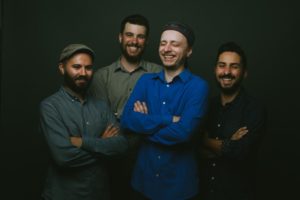 Led by accomplished frontman Fraser Melvin (Guitar & Vocals), this remarkable 4-piece band performs a mixture of Blues, Roots, and R&B. Formed in 2008, the Fraser Melvin Band rounded out their lineup when Alex Furlott (Bass) and Fraser met Jonathan Hyde (Drums) and Andrew Moljgun (Saxes & Tambourine) in college. This tight group quickly earned its popularity with crowds across Ontario and Quebec with their energetic live performances and musicianship displayed through a diversified repertoire of tunes. From their countryfied covers of Jimi Hendrix, to their funk interpretations of Bob Dylan, to their own soulful originals, the FMB draws on a wide variety of influences throughout their set. The quartet has performed at numerous festivals including the Kitchener Blues Festival, the Toronto Jazz Festival, and the Norfolk ’N’ Blues Festival. In 2012 they competed in the International Blues Challenge in Memphis, Tennessee. With a lead singer that sounds 30 years his senior, a honkin’ sax man, and a rhythm section that grooves, the exciting and entertaining Fraser Melvin Band will get you out of your seat, shaking a hip, and singing along.