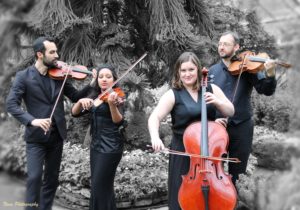 Since its inception in 2010, the Ton Beau String Quartet has been committed to engaging and challenging audiences by presenting a mix of classical quartet gems along with music of today. The quartet has collaborated with composers Kevin Lau and William Rowson, and most recently Keyan Emami. As well as founding their own concert series, the TBSQ has performed at the Toronto Music Garden, the Hart House Sunday Afternoon Series, Belfountain Music Festival, and Guelph University. They have enjoyed several collaborations with a diverse group of distinguished artists including Spectrum Music, pianist David Braid, folk band “The Kruger Brothers”, clarinetist Peter Stoll, pianist Peter Longworth, Afiara String Quartet, and members of the Cecilia String Quartet.

Each member of the TBSQ is dedicated to inspiring people of all ages through music education. They can be found coaching and teaching several times a week. As a quartet, they have presented workshops and masterclasses at Wilfrid Laurier University, Westport Chamber Music Festival and many schools in the Greater Toronto Area.