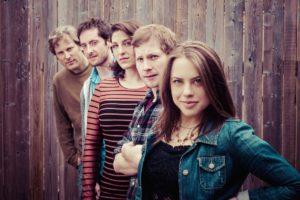 Known for rich harmony, powerful vocalists and honest storytelling, folk/blues band Crooked House Road has been growing a steady following in their hometown of Toronto since their inception in late 2013. They released their self-titled debut album in May 2015, produced by Juno winning and Grammy nominated producer Ken Whiteley and were named one of BlogTO’s Top 10 Toronto bands set to break in 2017.

The album was premiered on Exclaim.ca and was named one of the 6 top albums to stream that week by Judith Lynch at the CBC under her weekly feature “Albums to Stream.” Their tunes have been featured on CBC programs across the country including “Fresh Air” CBC Radio 1; CBC Fredericton; CBC Saint John, CBC Kelowna and CBC Saskatchewan.