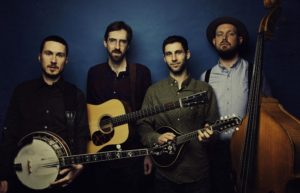 The Unseen Strangers have ambitiously cultivated a musical identity shaped by good old-fashioned bluegrass, the limitless barrage of contemporary musical influences, and a curious sense of humor.

The band was started in 2008 by Adam Shier, songwriter, multi-instrumentalist, and driving force behind The Unseen Strangers. Adam fell in love with the sound of Bluegrass while attending college in Halifax and was soon recruiting his best friends to be in a Bluegrass band. The band quickly recorded an album and were excited to win a Music Nova Scotia Award in 2009 for Bluegrass/Country Album of the Year. The group has grown immensely from these small beginnings but a similar goal remains, to play new energetic bluegrass music with respect to the incredible lineage of its tradition.

The Strangers approach to bluegrass is open-ended yet inclusive; they’ve been on the roster for several forward thinking festivals, including Delfest (hosted by bluegrass legend Del Mccoury), where they won the band competition in 2013. The Unseen Strangers continue to add to their diverse festival resume while consistently developing their sound both onstage and in the studio.