We don’t like to brag, but here in Old Town Toronto we have quite a lot going for us. The incredibly rich history, the marketplace full of hard to find delicacies, the unparalleled culinary scene, stores for literally any possible need you could have…but did you also know we have an internationally loved public art scene as well?

Art is everywhere in this city but in Old Town Toronto we take some pride in knowing that our streets are made more beautiful by the wealth of creative talent who have considered us a canvas. Below you’ll find some of our top picks for your very own Old Town Toronto Art Crawl! 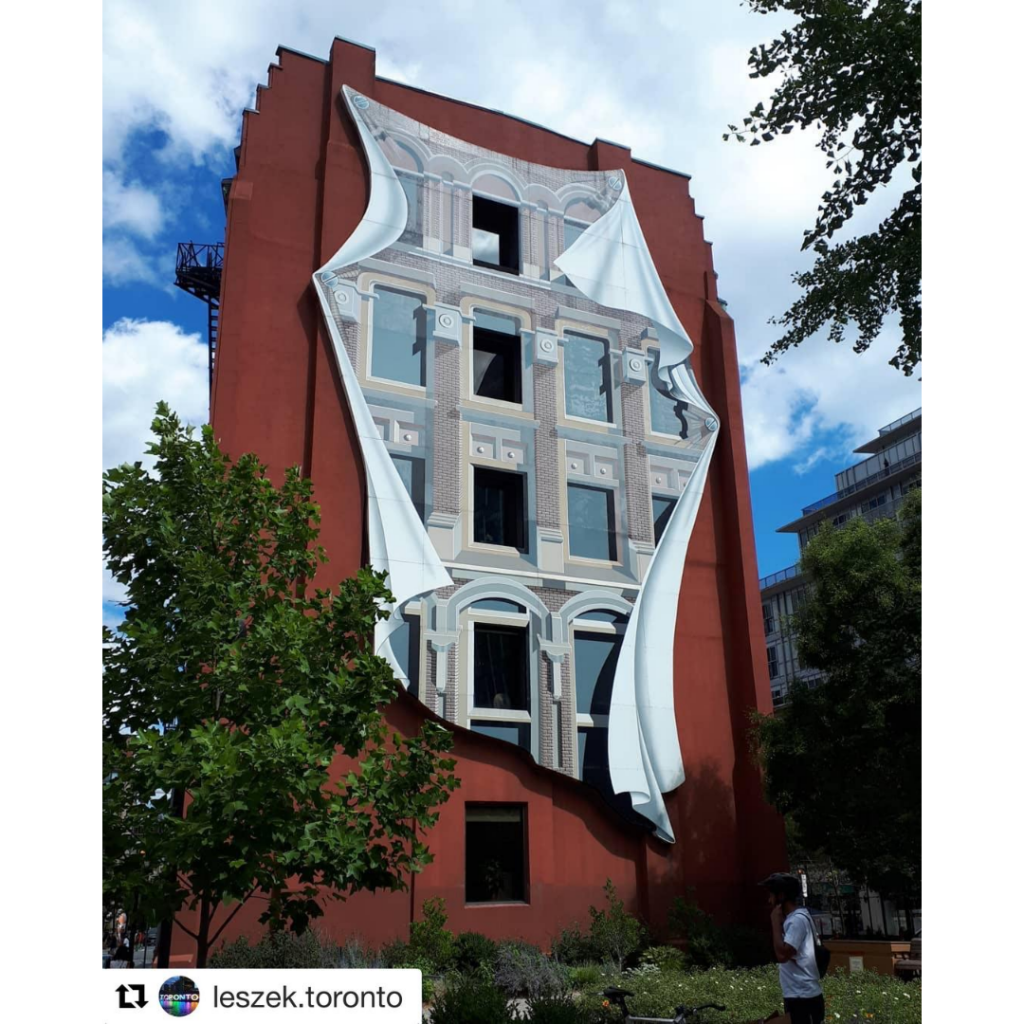 While the Flatiron Building is impressive on its own as one of the most iconic structures of Toronto, what never fails to amaze is the beautiful eye-catching mural on its back wall. The mural was created in 1980 by famed Calgary-based artist Derek Michael Besant and utilizes a centuries-old art technique known as ‘Trompe-l’œil’, which translates to ‘deceive the eye’. The whole piece is a beautiful optical illusion that appears as if the mural is a piece painted on fabric and hastily pinned on. The edges around the mural, where it appears to be fluttering, always makes a person look twice to make sure it’s a part of the painting itself. 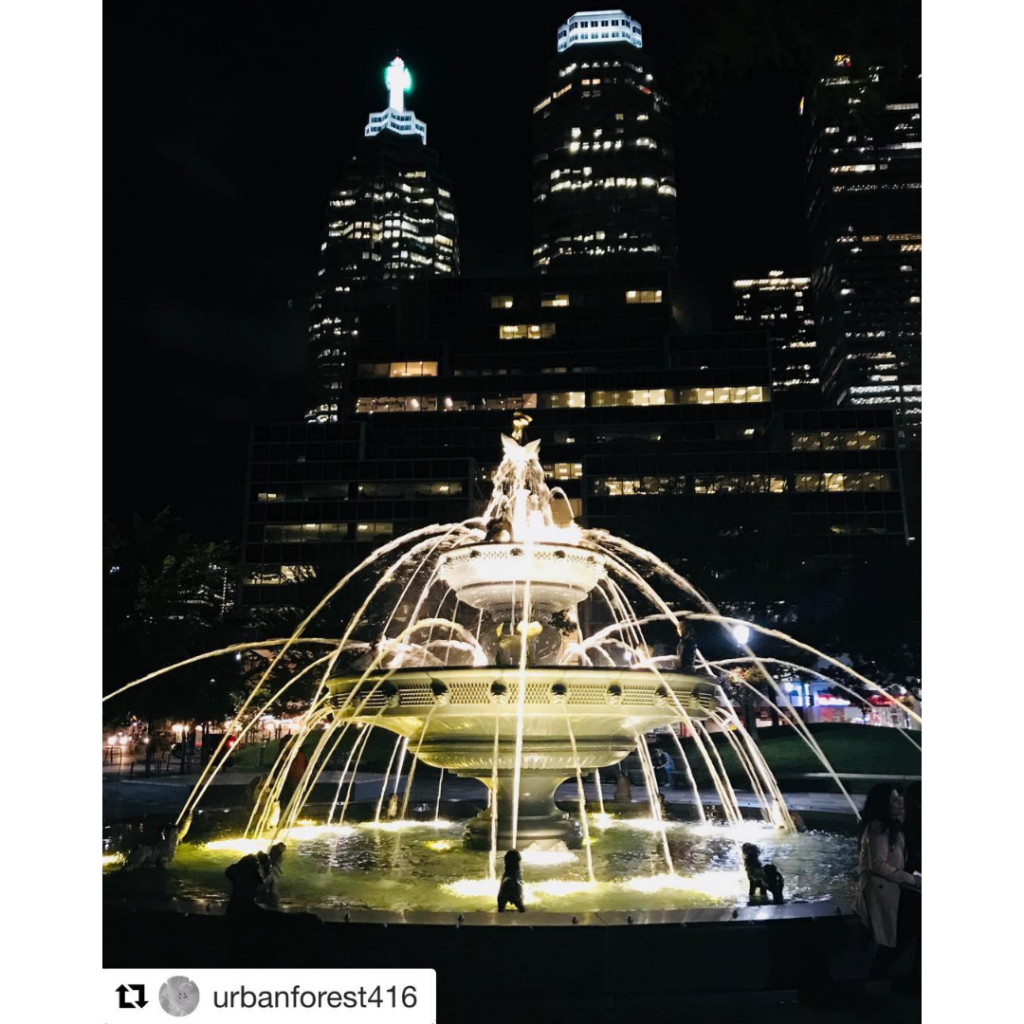 Behind the Flatiron building you’ll find yourself in the beautiful Berczy Park, which is incredibly dog-friendly as evidenced by its famous two-tier fountain featuring cast iron statues of 27 dogs and 1 cat. The fountain was part of a revitalization project by Claude Cormier and Associates and features the dogs all looking up at the top of the fountain, which has a giant bone displayed in it. The cat, meanwhile, is busy looking at…well, you’ll have to see it for yourself to find out. 😉

Currently there’s a water restriction so people visiting won’t be able to catch the full experience of the fountain, but the doggos are still there and, notably, maintaining a safe distance from each other!

Here’s a fun little game to play while you’re there: Can you name all the different breeds of the fountain dogs? 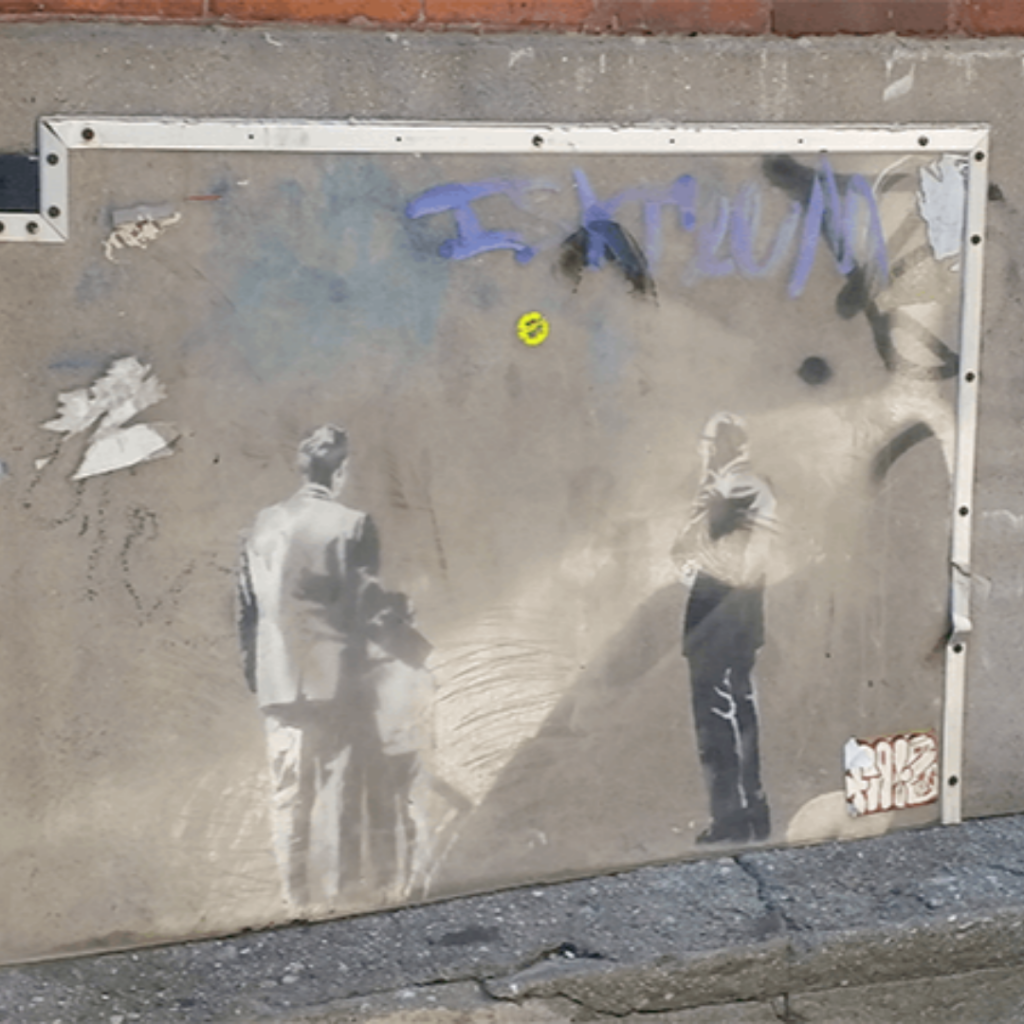 This one comes from our resident historian and tour guide Bruce Bell of Bruce Bell Tours! He says: “One of the most interesting stops on my tours in Old Town Toronto is the original Banksy graffiti art in the alleyway at Church and the Esplanade.” You’ll find it just behind the Goose Island Brew House before entering their back patio off of Church.

For those who don’t know, Banksy is an anonymous graffiti artist who made his start in Bristol, England back in the 1980s and very quickly gained notoriety for his politically-themed stencil art.

Interestingly, this piece is probably one of the more overlooked pieces of Toronto art, as people walk past it every day without noticing. Back in 2010 Banksy paid Toronto a trip and left his mark on a few locations in Toronto. Some had later been painted over or revealed to be fake, but this one in Old Town Toronto was found, verified as authentic, and protected with plexiglass. 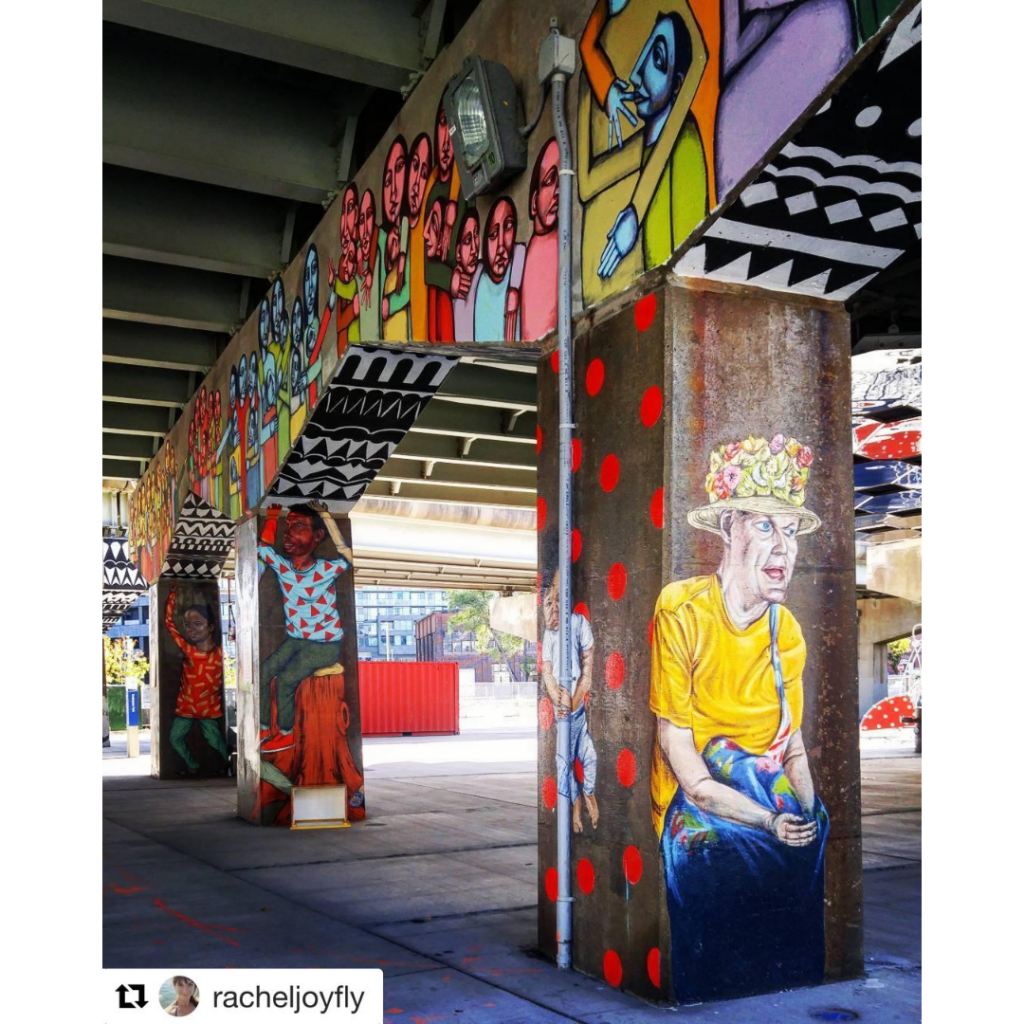 A little East on the edges of Corktown you’ll see something that was the first of its kind in Toronto and the whole country. Underpass Park is an extensive and elaborate park built under a trio of overpasses to the Don Valley parkway at Lower River and King. And honestly it’s one of the most well-hidden instagrammable places in the city.

Originally opened in 2012, the park was jointly designed by PFS Studio and The Planning Partnership and features a basketball court, skate park, beautifully designed recreational structures, and absolutely stunning street art. Underpass Park was definitely a success and managed to transform a fairly underused area of the city into a community hub where farmer’s markets and events take place. The jungle gym is a contemporary sculpture in itself, the reflective octagonal stainless steel surfaces designed by Toronto artist and architect Paul Raff plays with the perception of the space, and the street art throughout the columns make you pause to marvel at the wonders of the medium.

StART “Outside The Box” Project 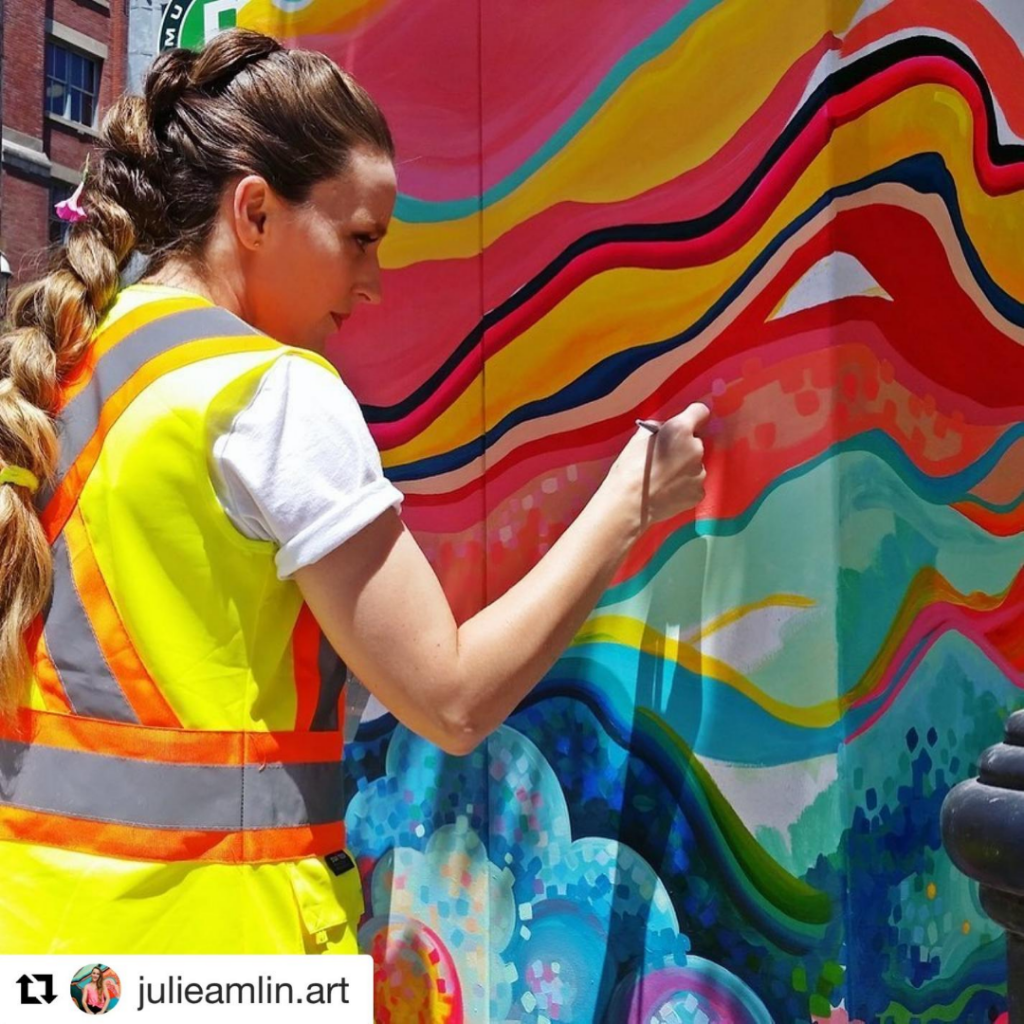 If you walk along the city you may notice some areas where traffic signal boxes have been beautifully painted. Turns out that it’s part of the Outside The Box project put together by StreetARToronto (StART). Since 2013 over 350 boxes have been transformed into gorgeous works of art by local artists, who take into account the context of the area the box is located and the city as a whole. It’s a fantastic initiative that showcases the creativity to be found in the city along with making for a more colourful and unique addition to life in Toronto!

Back in July Old Town Toronto was honoured to receive an addition of the project on the corner of Church St. and The Esplanade that features the bright and colourful art of Julie Amlin! Check out her work on Instagram!

Want to know what other street art is around the city? StART has you covered with this handy map! 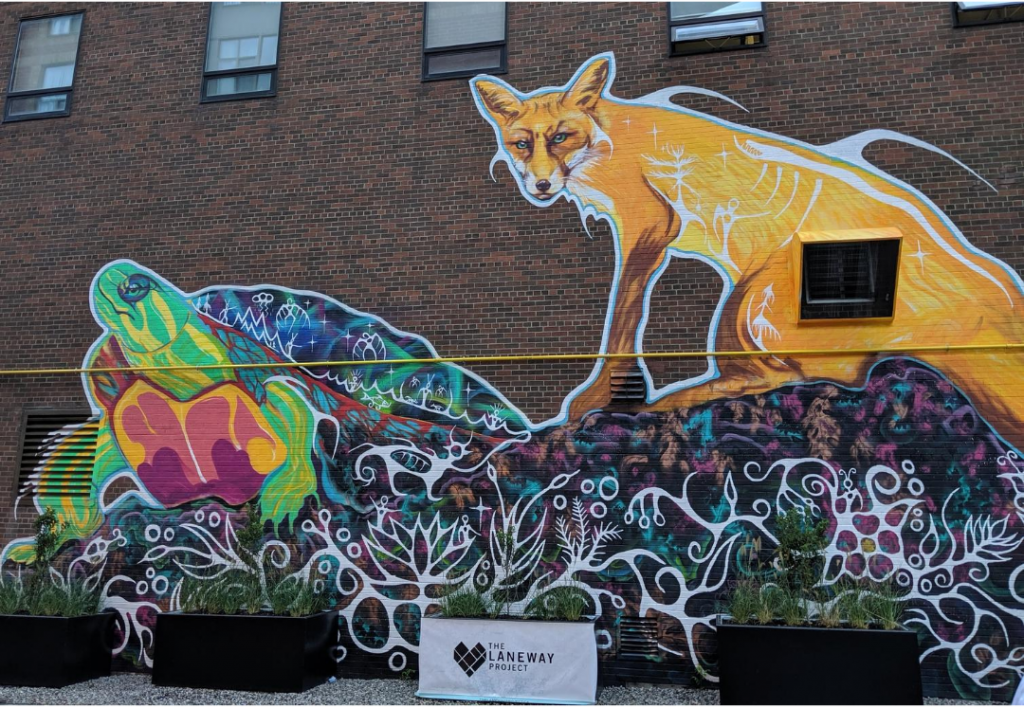 We absolutely love it when small parts of the city change in a big way, and last year we saw an incredible new mural in our neighbourhood from the Laneway Project as part of the Nicholson Lane Revitalization that transformed the utilitarian space into a thriving public area. The breathtaking mural was painted by local artists Nyle Miigizi Johnston and Monica Wickeler and stands as a wonderful stop on a walk through the neighbourhood! 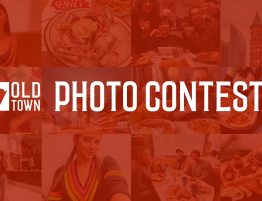 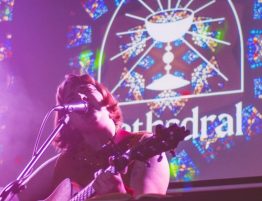 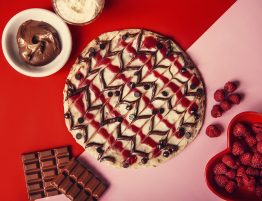 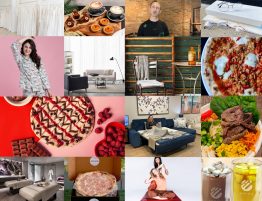 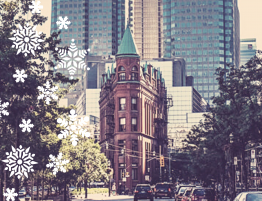 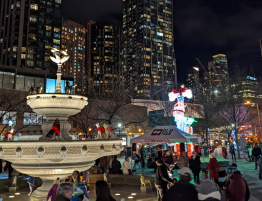